Just like Ted Cowan, Steve Katz, Madeleine Brookes and Jabiz Raisdana I thought I would sum up my thoughts on the ADE Asia Institute 2011 in Ho Chi Minh City, Vietnam.

It’s actually really hard to pick a point to start. It really says something about the whole experience in that I’m finding it hard to sleep with the sheer number of things that are running through my head as a result.

I’ll try to break it down into a number of factors why the ADE Asia Institute 2011 was amazing.

Don’t bother applying to be an ADE if you don’t want to meet people as you will meet, work with and make friends with a number of people. Without a doubt. The creativity, ideas, shared emotions and contrasting philosophies will have your brain reeling with glee and sometimes bafflement! To share is to learn and we shared and learned a lot during the five days we were together.
From the Friday night, Rebecca Stockley got us into gear with some activities to get us out of our comfort zone. Normally I would cringe at the thought of running around finding somebody to do some weird dance with but this felt different, there was a purpose and Friday night set us up for the challenges we faced as groups later on. Rebecca was a constant source of reassurance and humor throughout the institute and I commend her for her energy and passion.
To be inspired at a conference is a wonderful thing. Has it happened to me a lot over the last few years? Sadly, no…
I can’t pick the number of times I was inspired over the course of the institute. From being inspired to get my DSLR out and start snapping again after listening to Joesph Linaschke to just being inspired to be a better educator from the overall experience of meeting so many fantastic PEOPLE. 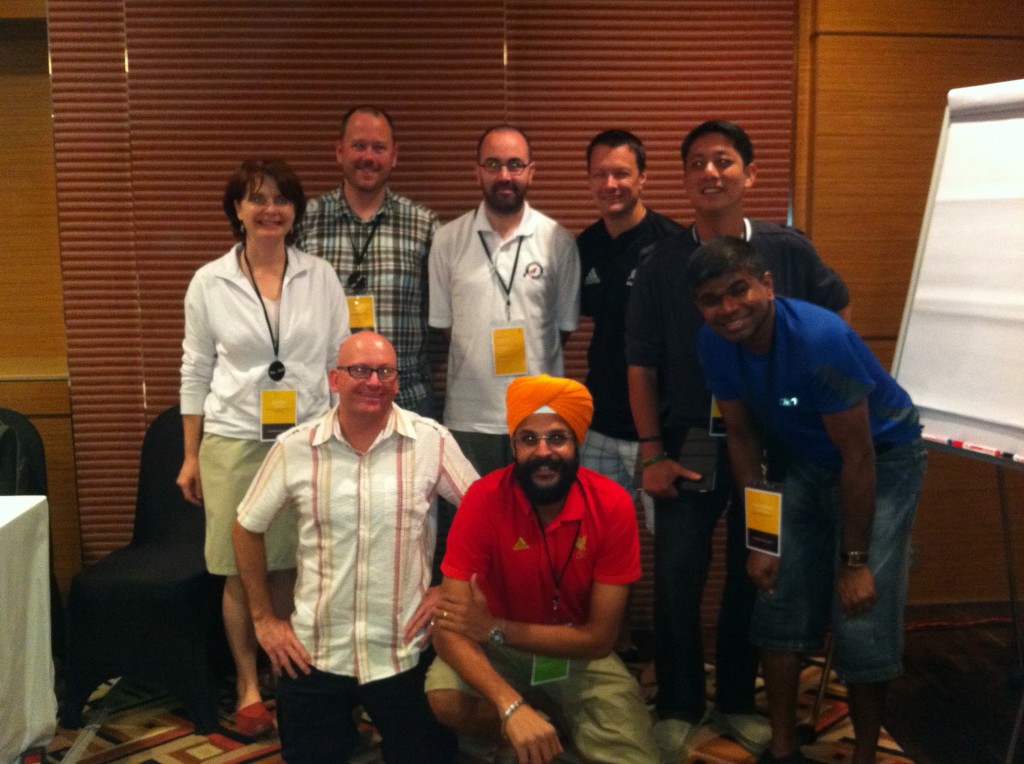 The process of the two main activities and watching each other’s finished products were massive learning experiences for me. The Great ADE Race was a non-stop, ever changing, heavily involved group discussion and exhausting experience (running two blocks to get to Notre Dame cathedral for an on-the-hour photograph is quite the experience!).  There were 5 of us ADEs and our Vietnamese helper, Ahn (who had quite the experience too!), we made plans, scrapped them, re-thought plans, performed the activities, re-thought plans and continued in that fashion. The editing on-the-fly on the iPod Touch was frustrating to say the least (thankfully I only took charge of a few pictures and videos taking (or making!). I don’t think the iPod Touch would have made it back if I had been in charge of editing…
The Saigon 360 PROCESS was my take-away moment of the institute. Teaming up with Jeff Dungan and Patrick McMahon with Jane Harris as a valued mentor we started off with great speed towards a concept of re-creating Apocalypse Now. A couple of scenes in and Jane was kind enough to interject and guide us to the WHY of our project. Were we going to be proud of the substance of our movie? What was the question we were meant to be asking? All great question and it stopped us in our tracks to re-think our…thinking. This leads us on to….

We’ve all heard about learning from your mistakes. We didn’t make a mistake in our approach to Saigon 360 we just missed the boat a bit on the WHY. So we had the PROBLEM…what now?! I think we spent an hour and a half struggling, brainstorming and discussing this. To come up with another idea totally threw us askew, we had to get our brains into another way of thinking. What was our question? Why did we jump straight into thinking about re-creating Apocalypse Now? Were we influenced so much by Vietnam war movies?

Hmmm. Were other people? Are our perceptions, as non Vietnamese, of Vietnam influenced by the phenomenal amount of Vietnam war movies? What happened to our perceptions after we actually visited Vietnam. We had it!! The euphoria was immense but we still had work to do. A visit to the War Museum and a couple of interviews with various tourists later and we had enough for a short introductory movie on our theme. Jeff, Patrick and I sat down back at the hotel to flesh it out, sort it out and export it out! We huddled together up until the deadline to put together something we were still not sure of. This is it.

Is This Your Vietnam? from Colin Gallagher on Vimeo.

The response we got from a number of people was emotional, gratifying and relieving. They re-affirmed our basic concept. One audience member said she was all “clenched up” inside watching it. Another mentioned their uncle who had been in Vietnam. Our video stirred conversation and emotions. We were elated, extremely proud and full of gratitude for the entire day we just spent together and the end result. If we didn’t encounter problems in the process we may not have had such a learning moment.

These are my initial fundamental reflections. I learned a lot. It was a very personal and often emotional experience. If I typed out all the things going through my head right now I would still be writing 5 hours from now. But I have to get on with the reality of day to day work and continuing my passion and drive to stand strong for my beliefs and my “brand”. Let the thinking continue…