I received a sad email from the founder of Doink, Karen Miller, that Doink would be shutting down its website animation services on September 15th. It’s terrible news for schools that have being using Doink as one of their digital storytelling tools over the last couple of years. Never fear, Doink are still alive in that they are focusing on their iPad and iPod/iPhone apps instead. But we aren’t using iPads in Grades 3-5.

I have introduced Doink into my previous two schools to great success; students love it and teachers love it. It gives students who may struggle with telling stories in the traditional words and paragraphs format another outlet to express their learning and understanding of concepts and stories. It gives students a creative way of conveying their reactions and reflections on pretty much anything they have come across in class.

Doink is a vector based animation tool where students drew “free-hand” and used handy tools like cloning to create frame by frame animations. The interface was so simple that students in grade 3 were as comfortable as students in grade 5 using it. 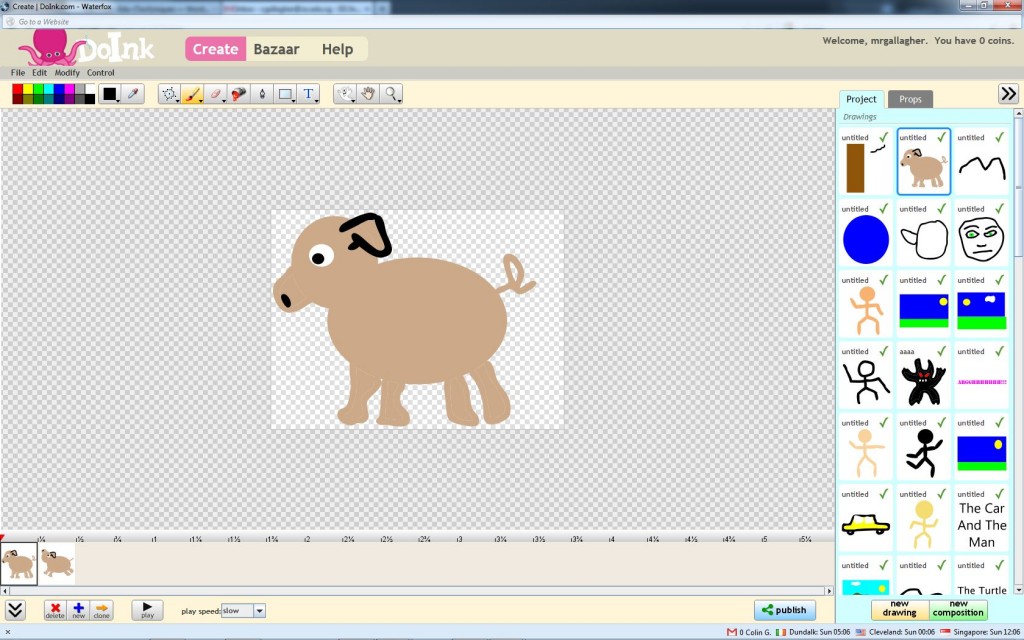 I’ve had a look through Doink to find some of my past student’s work and realize that one of the best ways we used Doink was to illustrate poems and nursery rhymes. I remember one student asking me what the Pyrenees were, she would never have known what they were if she didn’t have to illustrate it. She would have read the poem, perhaps recited it in class but may never have asked that question. Doink added more to comprehension.

Here are some examples I found from my last school.

One of the biggest projects we embarked on is a collaborative story in grade 4. An alternative Two Bad Ants story. First the students had to plan the actual writing together, then plan animating each part that had written. So they had to communicate, what color the ants were, the scenes, etc. we then joined up all the animations together and played it as they told the story on a read aloud night for the parents. Do you think I can find that all joined up movie?! Nope! I guess it was before my Vimeo days!

In my current school we used Doink as an illustration to a science experiment reflection. Naturally, with @Shaza33 ‘s class. Kinda sad now, because with our start of having Digital Portfolios for grades three through five, this would have been fantastic to embed into their portfolios.

We also had a little fun side project in grade three in a unit about systems. We had to tackle the compositions in Doink to make the planets move at different speeds around the sun. Fun but challenging!

The main reason stated for Doink closing is the never-ending updates for Flash and the struggles to keep up with that. I understand that and can empathize with that, Flash is a nightmare to keep on top of, and that’s just as an end-user! So now, Doink will only be available on the iPad and on the iPhone/Ipod Touch as Doink Express. Unfortunately this doesn’t work for us as we have a vision in our school that iPads are in use in the Kindergarten grades, with Macbook Pros for the higher grades.

I wish Karen and the Doink team all the best, Karen was always one to reply to any of my student’s work that I tweeted out and was always around to touch base and chat Doink! I’m going to miss introducing Doink to new students every year (I will miss the arguments over how to pronounce the name the most!). It will be hard to find an animation tool online that gave the students so much freedom of expression.