Edit 2019: This was written in 2010, this website doesn’t even exist anymore; it redirects to Bronx Zoo. Enjoy though!

This IS an example of how we added a little engagement and “zip” into our English classes.
This IS going to show you some examples of writing influenced by the integration of technology.

I don’t know how Build Your Wild Self came into my head when G3 were discussing with me how they are reading the old Icarus tale in English class. I didn’t even clearly remember if they had the option of wings. Surely they must have! So I forged ahead and told them my plan of how students could create their very own Icarus (or Daedulus because as some students pointed out to me, he lived!). Then after creating their own version they would write a short narrative of the upsides and downfalls of having wings and being Icarus/Daedulus. 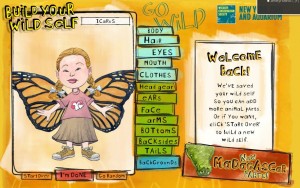 Simple yet effective as my old Art teacher used to say!

As one of the English teachers teaches all of the Grade 3 I.T. classes as well it was decided we would use I.T. class time to do this. Time frame was 2 blocks of 40 minutes; some students could have more if required. The carrot at the end of the stick for the students was the license to create all sorts of crazy creatures on the website in a follow up activity after being restricted to just normal body parts (and wings!) for their Icarus activity.

Grade 3 are in their first year of I.T. class with an English speaking teacher, in G1 and G2 they are taught by their Chinese homeroom teacher. The lesson plan for the first 40 minute class took this into account.

1st Lesson:
First of all I asked one student to tell me the story of Icarus in about 20 seconds
A brief explanation on how to get to PowerPoint (yes, Powerpoint as for some reason BYWS won’t paste the final creation into Word).
And a brief explanation on how to access our new and funky Primary Links website I made in Google Sites which makes it a whole lot easier for younger grades to access links.
Rundown of how to make their Icarus on the website and how to copy and paste into their PowerPoint. An extra step in cropping the image was included for those who had time to do that.
Finally a runthrough on how they save it successfully in their personal network drive.

Whenever the student got to the stage where they had their Icarus and title on their PowerPoint slide they were prompted to begin their writing passage (imagine what it would be like to have wings; likes and dislikes, positives and negatives).

Here are some examples of finished pieces:
Icarus

Click Fullscreen on the Scribd Menu to get a better look. Sure there are grammatical errors that will need to be reviewed in the next class but it’s the story I was looking for.
Observations:

It went really well! The distractions of crazy animal parts proved too much for some students but they soon got to curbing their enthusiasm and making their Icarus (Icarii?!). I only had one class that moaned “do we have to do Icarus…?” which was a testament to the appeal of BYWS.

The short narratives the students created varied in quality and imagination which was expected but the use of BYWS to add depth and appeal to the story was a great way to expand their thinking on the whole story and subject. I loved where some of the students took their story and the different angles they had on what it would be like to have wings. Would they have gone there without the visualisation of BYWS? I’ll leave that up to the scholars with mightier brains than I.